It is clear that significant progress is being made by manufacturers in reducing the cost to consumers and the ability to charge your vehicle is increasing significantly, so does it follow that the demand will increase significantly to reach the 2030 target?

After much speculation in the press, on 18th November the government confirmed their commitment to bringing forward the ban on the sale of petrol and diesel cars from 2040 to 2030 as part of their Ten Point Plan for a Green Industrial Revolution.

The plan sets out plans for generating greener power, reducing harmful emissions, making buildings more energy efficient, as well as zero-emission public transport, plane and boats. The government’s commitment for electric vehicles is for “Phasing out sales of new petrol and diesel cars and vans by 2030 to accelerate the transition to electric vehicles and investing in grants to help buy cars and charge point infrastructure.”

While it is clear that the number of new electric vehicles being registered each year is increasing, is it realistic that petrol and diesel cars and vans can be phased out over the next nine years?

Although the purchase price of electric cars is still higher than the petrol or diesel equivalents of the same model, some studies estimate the cost of a buying a new car will be the same for all fuel types by 2024. However, a recent study by Direct Line Car Insurance has shown that although the average purchase price of a zero emission car is £5,000 more than the petrol equivalent, the annual running costs of an electric vehicle are lower (and may reduce further as technology improves) so the total cost of owning a zero emission vehicle would be cheaper over the lifetime of the car.

Another key factor in increasing demand for Ultra Low Emission Vehicles (ULEVs) is increasing the availability of publicly accessible electric charging facilities. According to Department for Transport data, in March 2015 there were 650 public electric charging devices in the UK and by March 2020 this had increased to 17,947. Gridserve are due to open the world’s first electric charging forecourt in Braintree, Essex within the next few weeks with two others planned in Norfolk and Surrey and many other business are also seeking ways of increasing electric charging in a variety of locations to ensure sufficient coverage is provided.

It is clear that significant progress is being made by manufacturers in reducing the cost to consumers and the ability to charge your vehicle is increasing significantly, so does it follow that the demand will increase significantly to reach the 2030 target?

Over this period more cars have come to market, with all major manufacturers offering ULEV versions of their models, the price has come down and the number of charging points has increased significantly, but has that influenced demand?

In 2010, only 0.05% of all vehicles registered were Ultra Low Emissions Vehicles (ULEV) and by 2019 this had increased to 3.5%. If this trend were to continue then by 2030 around 8% of new cars registered would be ULEVs, however, this assumes that the historic rate of growth will continue, which is not realistic given the investment in infrastructure.

Looking at more recent year on year growth, between 2016 and 2019 the market share has increased by an average of 132%. By applying this rate of growth it can be estimated that by 2030 that the ULEV market share would be 76%. To achieve the target of 100% of new cars registered in 2030 being ULEVs there will need to be a year on year growth of 174%.

It is difficult to forecast exactly how quickly people will change to ULEVs, but it is clear that the market share is increasing. Looking at the first half of 2020, 7.6% of cars registered were ULEVs, which is more than double the share in 2019. While this is encouraging and shows that there is an appetite for electric vehicles it remains to be seen what happens to new car sales over the coming years and whether there will be a last minute rush to buy petrol and diesel cars before they are phased out. 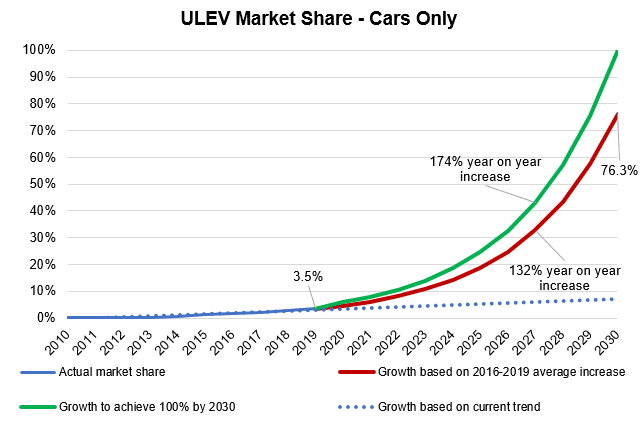 It is an ambitious target and there are no doubt a large number of drivers who remain reluctant to make the change, but with manufacturers driving costs down, increased coverage of charging points across the UK and a clear year on year increase in market share it is possible that the demand for electric cars will be there by the time the new petrol and diesel sale ban is enforced.

This does of course raise other questions in the market such as will we see a sharp increase in the second-hand car sales market in 2030. We believe this could be likely but would only be relatively short lived except for the die-hard petrol heads or classic car enthusiasts.

The more burning question will be accommodating the necessary infrastructure. Some upgrades are obvious and it is more about cost than the physical delivery. However, how does the Victorian terraced house with no driveway and only limited on street parking, in a rural village with narrow lanes accommodate the charging? Is this a market for a portable charger, in road charging or do the owners simply need to plan every trip around a charge point?

Clearly the move to electric is positive and cannot come soon enough, but it is not without its challenges. 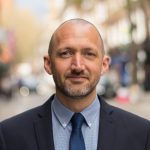 Simon Possee Associate Director,Transport
END_OF_DOCUMENT_TOKEN_TO_BE_REPLACED
We use cookies on our website to give you the most relevant experience by remembering your preferences and repeat visits. By clicking “Accept”, you consent to the use of ALL the cookies.
In case of sale of your personal information, you may opt out by using the link Do not sell my personal information.
Cookie settingsACCEPT
Manage consent