The Increase in Low Traffic Neighbourhoods

However, it is clear that there is a fundamental need to engage with residents, business owners and emergency services prior to the instalment of these measures’.

During the current pandemic, many local authorities have been making alterations to roads and streets across the country to help encourage sustainable travel. However, these changes have not only divided opinion in many areas, but also been highly controversial, just as many more return to travelling daily for school and work.

As a means to increase sustainable travel to accord with local and national policy, sections of the highway have or are in the process of being converted into Low Traffic Neighbourhoods (LTNs). LTNs have been on the rise in the UK for a few years now and are relatively low cost, consisting of installing restrictions on residential streets by using physical barriers such as gates, bollards, and planters, with associated signage and road markings also being deployed. The intention of these schemes is to force vehicle traffic onto the main routes, and allow pedestrians and cyclists, to safely utilise the high streets and residential roads without experiencing the dangers, noise and pollution associated with vehicle traffic.

Longer, convoluted vehicle journeys, the effects of congestion and air quality, as well as potential detriment to local businesses, are cited as being reasons why LTNs should not be employed in certain locations. Many opposing LTNs also suggest that some schemes have been added into the road network without appropriate consultation or assessment, including with the emergency services whereby some fire tenders and ambulances are understood to have had difficulties gaining access to some streets. Consequently, a few authorities are now changing their stance on LTNs and removing schemes shortly after being installed.

It is evidently a challenging task deciding where LTNs should and would be best placed and trialling these changes on the ground over a sustained period is no doubt the most appropriate way of confirming the pros and cons of such a scheme. Trying to address issues which have arisen from years of habit in existing developed areas, although difficult is often necessary, and suitable improvements can not only be made but also many lessons can be learnt from adopting these LTN schemes within our neighbourhoods. However, it is clear that there is a fundamental need to engage with residents, business owners and emergency services prior to the instalment of these measures, whilst undertaking well considered design of a scheme and regular review of its operation.

Despite there being some problems, Low Traffic Neighbourhoods deserve a chance, for if we are to effectively change travel behaviour, with the right approach, such schemes should be deemed desirable. They would aid methods of sustainable travel for short distance trips between our homes, schools, shops and places of work; helping to reduce the number of vehicles on our local roads; and improve people’s health and safety as a result, something which surely everyone can agree would be for the good of our existing streets and future development. 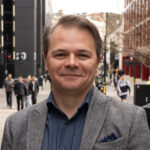 Mike England Director,Transport
END_OF_DOCUMENT_TOKEN_TO_BE_REPLACED
We use cookies on our website to give you the most relevant experience by remembering your preferences and repeat visits. By clicking “Accept”, you consent to the use of ALL the cookies.
In case of sale of your personal information, you may opt out by using the link Do not sell my personal information.
Cookie settingsACCEPT
Manage consent