The future for tall buildings in London

London is low density compared to many European capitals and it is generally accepted that the unchecked, disconnected urban sprawl which characterised its expansion in the late-19th/early-20th centuries is not desirable.

Over the past year, London authorities have become more hesitant towards taller buildings. They continue to prove divisive within communities and have been the subject of several high-profile appeal decisions (e.g. the Master Brewer, Hillingdon case), considering where they might be best located and what makes a site ‘worthy of the gesture’ for a tall building (e.g. Manor Road, Ealing). This is reflected in New London Architecture’s (NLA) Tall Building Study 2022 which identified a marginal dip in high-rise projects in the capital from 2021, as well as a shift in focus towards taller buildings in outer London boroughs.

Of course, such hesitancy is understandable, especially in the wake of the Grenfell disaster in 2017 and the ensuing, unresolved cladding crisis. Whilst this is, of course, a vital conversation which must continue, we want to briefly touch on the townscape-led case for tall buildings and the role they can play in the sustainable growth of London. This discussion has been somewhat side-lined by parallel conversations on retrofitting existing buildings over new development, but the two are not mutually exclusive.

London is low density compared to many European capitals and it is generally accepted that the unchecked, disconnected urban sprawl which characterised its expansion in the late-19th/early-20th centuries is not desirable.

However, to meet the predicted increase in population and the need for housing, densifying London is unlikely to be achieved by low- and mid-rise buildings alone, especially considering the growing competition that now exists on a finite supply of sites from other land uses, most notably urban logistics and distribution.

Whilst critics of high-rise often highlight that similar densities can be delivered with carefully designed mid-rise typologies, particularly when redesigning mid-20th estates where tall buildings were isolated in large swathes of inactive open space, this is not an option for more constrained sites where the only way is up.

Tall buildings offer the opportunity to create a vibrant, polycentric city which supports walkability and public transport connectivity: two key pillars of sustainable cities. Providing they are well-located and well-designed, they can be positive additions to the townscape by ‘treading lightly’, using land efficiently, offering active bases and boosting the profile and legibility of the wider place.

And of course, tall is relative to its context, with definitions varying from NLA’s 20 storeys to the London Plan’s more conservative 6-storey minimum (considered mid-rise in most urban contexts).

In other words, no one is suggesting dropping the Shard in the suburbs… Just that we have an informed and open debate, and recognition, of the potential role tall buildings have in delivering sustainable cities. 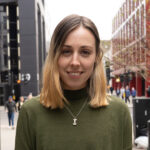 Georgia Foy Associate,Built Heritage and Townscape
END_OF_DOCUMENT_TOKEN_TO_BE_REPLACED
We use cookies on our website to give you the most relevant experience by remembering your preferences and repeat visits. By clicking “Accept”, you consent to the use of ALL the cookies.
In case of sale of your personal information, you may opt out by using the link Do not sell my personal information.
Cookie settingsACCEPT
Manage consent